The Dark Side of Social Media

For every action, there is an equal and opposite reaction. – Isaac Newton

Social media is no different.

The weekend of October 17th showcased that to its fullest thanks to college football. College football brings out the most passionate fans and while the majority have a sense of right and wrong about their passion, there’s a group who have to limit.

Let’s start with this –

So how does the end of a college football game have to do with the dark side of social media? Well, let me introduce you to Blake O’Neill. Blake O’Neill is the punter for the University of Michigan, you know, the one who fumbled the ball in the video above. 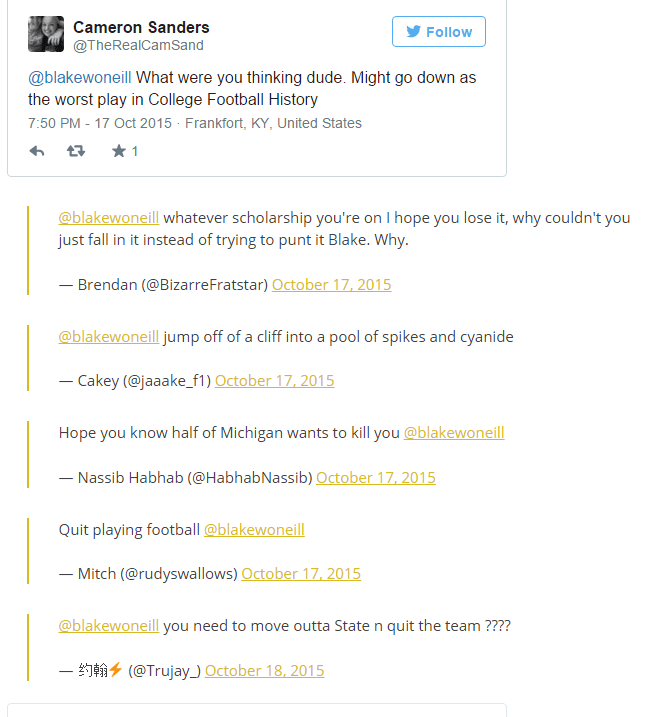 To be honest, the minute I saw (or at least when my husband told me what happened while we were sitting in the stands of our game) I knew what would ensue online. Working in social media, you just know when things like this are going to happen.

Now it’s time to get on the ol’ soapbox.

What kind of idiot “fan” would make threats like that against a college athlete? He’s just 20 years old or so. This is the dark side of social media. It’s a place where people (trolls) sit behind their screen of choice – laptop, smartphone, tablets, etc. – and hurl insults and threats they would not dare make in person. I dare each of those ones in the picture above to say that to his face, but you know what? They won’t do it.

Social media has given everyone the ability to hide behind their screen and say things they wouldn’t ever say in person. Bullying, death threats – they are all there. If people are going to do that, they need to grow a pair and do it in person. But wait, they won’t do it because it would cause them to actually get out of their mom’s basement and do something and put themselves at risk. Blake O’Neill isn’t the first person this has happened to and sadly, won’t be the last. College football has passionate fans. Soccer has them. The NFL has them. Every sport on earth has fans who take the social media airwaves to air their grievances. Yes, even I have criticized our school’s quarterback on social media, but it wasn’t anything I wouldn’t walk up to his face and say. Hurling death threats and such is another matter entirely. That is crossing a line.

What it is going to take for this dark side to go away – or at least shrink?? This is an issue that transcends sports – it’s cyberbullying, insulting others to make you feel good, even displaying a false image of your life online. For every negative post, there should be at least 3-4 good ones to make up for it. Cutting people down to make yourself feel better or in Blake’s case, taking your hurt and frustration out on a player because of one mistake (other than that fumble he had an amazing game) and how it made you feel is never okay. Ever. I know the world is full of mean people and trolls who will always be there, but we all need to speak up stop this. If you can’t say what you post to someone’s face, then why post it at all?

Stepping off the box now.