Heard it Through the Grape’VINE’? It’s Making a Comeback 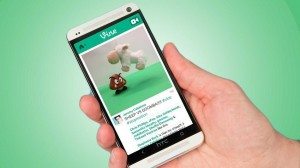 You’ve all heard about the phrase “Heard it through the grapevine,” in some way, shape or form, basically meaning you heard news indirectly. Well, it’s making a comeback due to one of the newest, hottest apps on iOS and it is now available on the Android market.

Vine, one of the latest ways to communicate with family, friends and co-workers has created quite a buzz. Although it’s been around for longer than most people know, it didn’t start generating this much publicity until it combined with Twitter.

It currently has over 13 million users with people calling it the “Instagram for Video,” according to CNBC (Langer, 2013). Vine became the “most used video-sharing app in the market, even with low adoption of the app” (Moore, 2013). This app allows users to create a 6-second video and share it, with its unique ability to zoom in and out if you are using an Android device. Although the time limit for this app is only 6 seconds, it has gone viral and everyone’s loving the share option. It is easy as tweeting your next big thing–in six seconds of course.

Everyone is trying to create the next Vine to go viral. Currently, the Vine with the most likes belongs to Will Sasso — Actor/Comedian — with over 440,000 likes already (CNBC). The video itself is nothing extraordinary, but it sure got the public’s attention. Check it out for yourself.

Since Vine just joined the Android market on June 3rd, the iOS app and the Android app aren’t yet in sync. It is still a work in progress. New features have been added to both platforms continuously up until now. These 6-second videos can be a great way to market and get word out quickly about your business. They can also be used for testimonials and quick reviews by the consumers.

Recent news from TechCrunch explains that Facebook is planning on making modifications to allow video sharing on their Instagram platform as well. It will be very similar to Vine, but with video-sharing capabilities of up to 10 seconds. A press event is scheduled to take place on June 20 for further information about this upcoming modification. We will just have to wait until Thursday to find out what their official plans are.

Moore, Robert (2013-03-06). “TechCrunch – Vine Takes Early Command In The Mobile Video Market Over Viddy, Socialcam And Others Despite Low Adoption”.